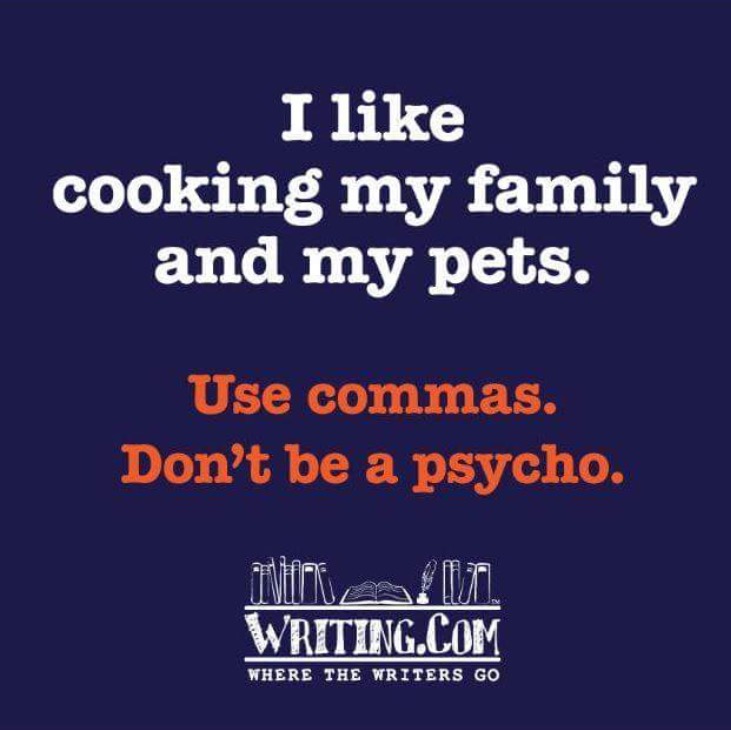 For the past three months, I’ve had the privilege of interning as an assistant editor for a small press. I’d like to say that most writers understand and correctly use grammar and punctuation, but they don’t. The most common mistake I see is the incorrect use of commas. So for the next few weeks I’m going to focus on correct comma usage, starting with the most basic.

An independent clause is a sentence that stands alone as a simple sentence. It contains a subject and a predicate and makes sense by itself.

Independent clauses can be joined by using a comma when separated by a coordinating conjunction, such as for, and, nor, but, or, yet, however, etc.

In the most basic of descriptions, a subject is the person or thing that is being discussed or described.

The predicate is the part of a sentence that expresses what is said about the subject.

Now that definitions are out of the way, let’s take a few examples of sentences that are independent.

Example: Mark shifted from one foot to the other. The sentence makes complete sense alone and contains a subject and a predicate.

Example: He couldn’t ease the tension building in his gut. Again, this sentence stands alone and contains a subject and predicate.

If I were to join these two sentences by using a coordinating conjunction, a comma must be used.

Example: Mark shifted from one foot to the other, but he couldn’t ease the tension building in his gut.

Since both sentences are independent, a comma is inserted before the conjunction.

Example: He screamed and he cried.

Although both phrases are independent, since they are less than four words, a comma does not need to be used.

But if one sentence is short but longer than four words, while the other is long, a comma should be used.

Example: Cindy cowered on the floor, and it wasn’t long before the entire school surrounded her with thunderous laughter.

The most common mistake I see is people using the Oxford comma, but not the first comma in a sentence.

Example: Mallory clenched her hand into a fist and she swung with all her might, but she missed her mark and spun to the ground.

Because the sentence has three independent clauses, the comma must be used to separate the first two (before the first and), and the third is optional. I prefer the Oxford comma and think the sentence flows better with it, but many people are opting not to use it. Either way it is a stylistic choice, so whichever you decide, be consistent.

The last mistake I’d like to mention for the comma is using them when the writer feels there should be a pause in the sentence, but the sentence doesn’t actually call for one.

Example: Brett struggled, for a breath, and slumped over the steering wheel.

While the commas before and after “for a breath” are for emphasis, the correct way to write it would be:

Example: Brett struggled for a breath and slumped over the steering wheel.

If the writer wanted a stronger visual, he/she might write:

Example: Brett gasped, struggling for a breath, and slumped over the steering wheel.

That’s the comma lesson for this week. Next week we’ll tackle dependent clauses and why one should not use a comma with them.

I am a wife, mother, grandmother, sister, daughter, niece, aunt, copy editor, friend, lover, reader, and avid writer. I became a teen mom at the age of sixteen, and grandmother at the age of 32. I love to share my views on the world and pull from my life experiences, with the hope to help someone out there figure out this crazy thing we call life. View all posts by cbcarpenter

One thought on “Oh, Comma!”